Here at CosmoQuest we spend a lot of time looking at craters. It is a job that only people can do – not computers (yet, anyway). Scientists have been trying to write programs that will effectively identify and count craters, but they have met with only limited success. As noted, craters are not always perfectly new and fresh, they can be modified and degraded, which can make them hard to spot. And as it turns out, there are a lot of other types of features that can be confused with craters that make impact crater identification potentially tricky. Below are images of just some of these types of features that could be confused with impact craters.

Domes and hills can be confused with craters if the viewer isn’t sure what direction the sunlight is coming from. For example, in the image below we see both a crater and a dome, they are labeled, but if they were not, could you be certain which was which? Our clue lies in the very tiny craters scattered all through the image. As we know from the other posts, craters are all over the place on the Moon, and come in all sizes. We know all those tiny circles are craters. We can use them to figure out which direction the sunlight is coming from – in this case, the lower left. We know that because the upper right of each crater depression is illuminated, just as one would expect, and there is a shadow in the lower left of each depression. This pattern can be seen in every crater in the image. 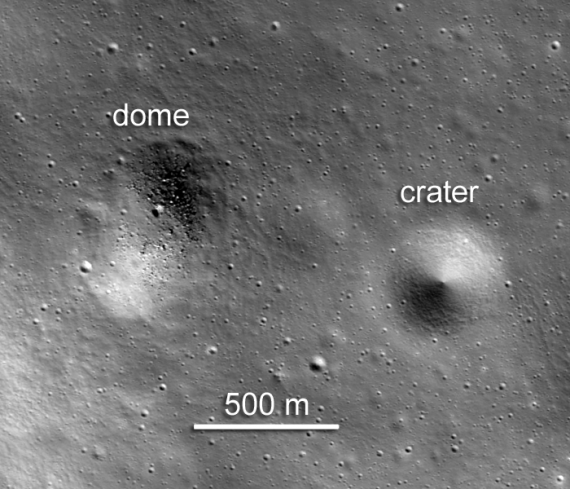 Dome or Crater. In this case, we can see both types of features, and we can note that the shadows on them are reversed. This can help us tell the difference between domes/hills and impact craters. Credit: LROC

The Dome now looks very different, because it is bright on the lower left and dark on the upper right, the reverse of what we see for the craters. This let’s us know it is raised, not sunk into the ground. Spotting hills like this can take some time, and at first glance, you might think they are craters! Always check and make sure you know what direction the sunlight is coming from in an image.

We can see the same issue with large boulders. Huge rocks are sometimes launched from impact sites to land nearly intact nearby. Or they can be the result of landslides, or other related activity. Below we see a large circular lunar boulder. How do we know this is a boulder, not a depression? Again, look at the shadows in the image. We can see the cracks in the upper right of the image are dark on top and light on the bottom. This then is the sign of a depression, and shows us that the light is coming from the upper right of the image. When we look at the boulder, we see this is consistent. The boulder is bright on the upper right side where the sun is hitting it, and is casting a shadow behind it to the lower left. 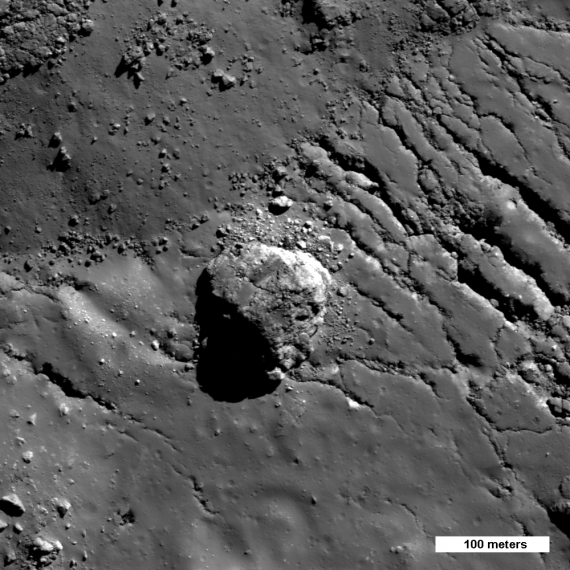 Large Boulders. Such features, if they are nice circular boulders, can be confused with craters. Look at other features in the image, such as the cracks, to help determine the sun angle. Credit:
LROC

There are other types of depressions than impact craters, and this can get really tricky. For example, here is a pit on the Moon. It isn’t a crater – there is no ejecta blanket around it, and it does not have a raised rim. Instead, it falls directly to the bottom where you can see a flat floor filled with debris. Pits like this can form when an empty cave (probably once filled with lava) is close to the surface, and shaking or impacts nearby cause a collapse. 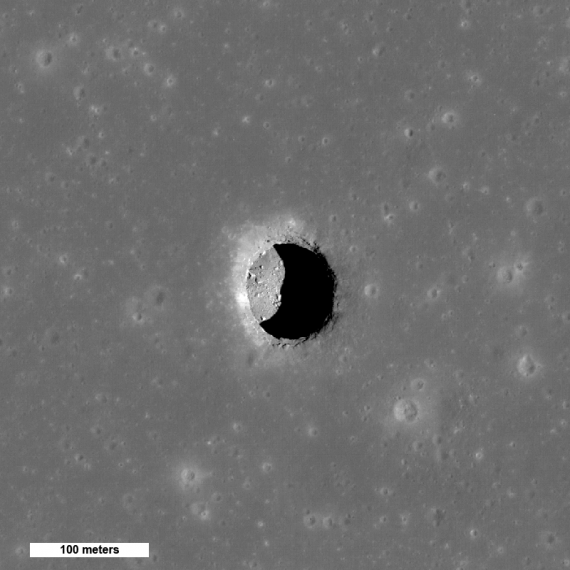 Lunar Crater Pit. This pit is a skylight into a larger cave underneath. Credit: NASA

Volcanic processes are responsible for a number of circular features that might be confused with impact craters. Take a look at the complex, overlapping circles near the center of the image, below. Again, we see no raised rims around them, nor impact ejecta blankets. And the fact that they all overlap is suspicious, too. This is the summit of Olympus Mons volcano on Mars. These are called “collapse caldera.” They are formed when magma finds its way to the surface, emptying large chambers underground. The “roof” of the chamber collapses and forms a circular depression. 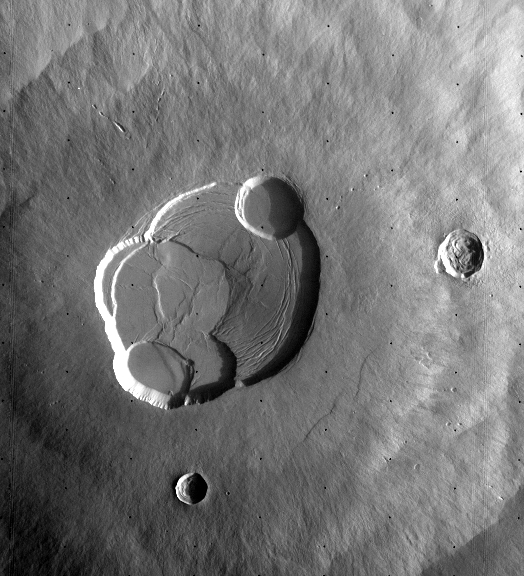 Central Collapse Caldera, Olympus Mons. Such complicated structures might be confused with craters. It requires an understanding of the general geology of the area to know that one is looking at the top of a volcano. Context is important when identifying craters. (The little, regularly spaced black dots are an artifact of image processing, not a part of Mars). Credit: NASA

Other volcanic features that might be confused with impact craters are these pancake domes on Venus. These domes are made of lava that erupted from a point and spread out evenly to form a nice dome. These are raised structures, and so if you know what direction the sun is coming from, you won’t confuse them with impact craters.

Finally, let’s look at something very strange indeed. Venus is home to features known as “Coronae.” Some of these look quite a bit like multi-ring impact basins, and so for some time it was unknown if they were impact craters, or if they had some other origin. It was crater counting that made it clear that they had vastly different distributions than the fresh, obvious craters around them. These are probably formed by hot rising bodies of magma under the surface, that cause breaking and partial collapse. 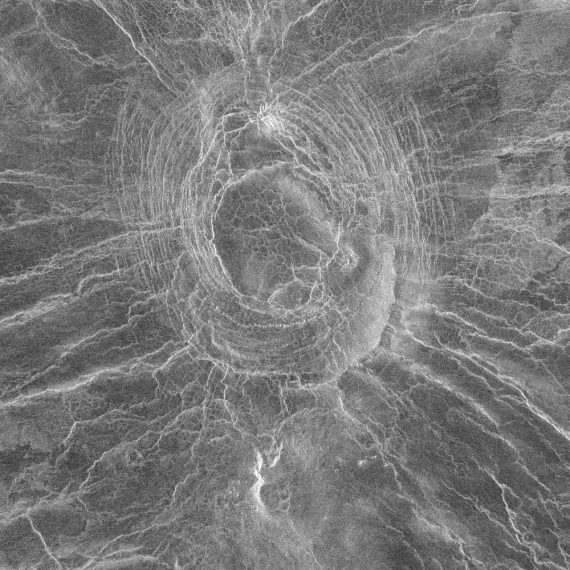 Venus Corona. It isn’t a multi-ring impact basin, but a result of magma (lava moving underground). These are common features on Venus, and help us to understand that it was volcanically a very active place. Credit: NASA

So now that you’ve seen so many impact crater imposters, you can see why it is so important for actual people to identify craters. The more counting you do, the more likely you will be to spot these counterfeits!