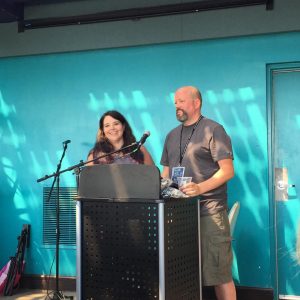 Our fearless director, Dr. Pamela Gay, along with Fraser Cain of Universe Today, hosts the weekly podcast Astronomy Cast, now starting it’s eleventh season. For the 2017 Eclipse, we welcomed over 125 of our fans to St. Louis for a weekend of science panels, socializing and gaming, ending in the grand finale of viewing the 2017 total solar eclipse at the site of longest totality in Carbondale, Ill.

Pamela and Fraser, along with AC/CosmoQuest staff members Susie Murph, Nancy Graziano, and Liz Sanders, welcomed our fans to the fantastically space-themed Moonrise Hotel in St. Louis. Events started on Friday, Aug. 18, with a reception in the fantastic rooftop bar at the Moonrise. 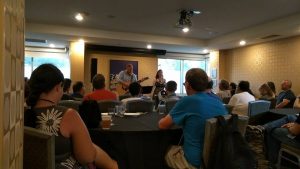 Musician Marian Call and her guitarist Seth Boyer joined us from her tour on the road, and entertained us during the reception Friday night and dinner Sunday night, and gave a whole concert on Saturday evening. She debuted a song specifically crafted for the eclipse called “Good Night Moon” and recorded a video at the conference. 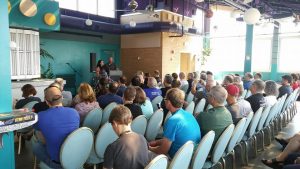 Saturday and Sunday had various space and science panels, including a two live recordings of Astronomy Cast – “Solar Eclipses 101” and “Your Practical Guide to Colonizing the Milky Way!” 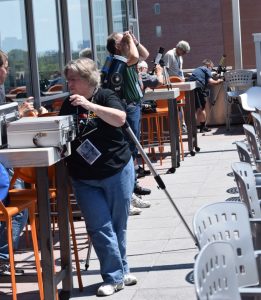 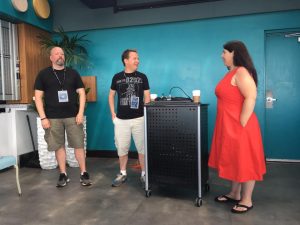 Composer David Joseph Wesley shared his new symphony created just for this eclipse “Syzygy,“and discussed the creative processes involved in expressing the beauty, wonder and emotion that comes from the awe-inspiring spectacle of a total solar eclipse.

Sunday night, the guests joined Pamela and Fraser for a banquet where they were regaled with the origin stories of how Astronomy Cast began, celebrated 10 seasons of astronomy, and discussed what events are planned for the future. 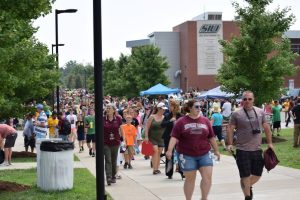 The crowd at SIU Carbondale, heading to watch the eclipse in Saluki Stadium. Credit: Susan Ferris

Monday morning before the sun, the whole group was up and boarded charter buses bound for the Southern Illinois University at Carbondale campus, where guests joined the Crossroads Festival to view the eclipse either in Saluki Stadium, on the campus grounds, or out at a private field reserved for telescopes and major gear. The day was spent enjoying the festivities, with the festival also hosting a carnival, a Tech and STEM Expo, arts and crafts, and entertainment.

Marian Call was one of the musical guests on stage at the Expo after the eclipse. The crowd at the staduim was entertained in the stadium by the SIU marching band, and had narration during the eclipse, noting the major points including totality. 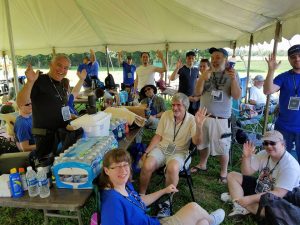 Some of the Eclipse Event attendees enjoyed viewing the eclipse out in an observation field set aside for equpment. Credit: Ruxandra Niculescu‎

The group out at the private field enjoyed solar observing and photography all day. The view of the eclipse itself was amazing, marred only by some temporary clouds. After the eclipse and a couple more hours of festival, the tired but happy group headed back to St. Louis.

It was a wonderful weekend of science and fandom. We look forward to planning more of these events for Astronomy Cast fans in the future!