It’s that Perseid Time of Year 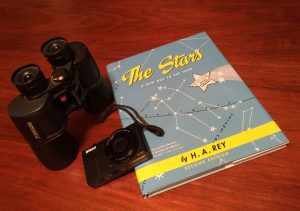 A few choice items that I bring along for meteor watching… but all you really need is your eyes!

It’s that time of year again, the time when Earth zips through the dusty debris of comet Swift/Tuttle resulting in a pretty spiffy display of meteors flashing through the night sky, for those lucky enough to have both clear AND dark skies overhead. Yes, it’s time for the annual Perseid meteor shower. This year, the peak occurs August 11/12 (late night on the 11th and early morning on the 12th), and this time there’s something a little special to watch for due to the gravity of Jupiter (thanks, buddy!)—an outburst of meteors, perhaps twice the hourly rate of most years. Usually, you can expect to see around 60 or so meteors per hour during the peak of the shower; this year we could see around 120 or more!

However, remember that ideally the sky needs to be very dark. If possible, stay up late and go out after the Moon has set (around local midnight/1am). Get away from big city sky glow. Take the time to let your eyes adjust to the darkness. Then, look up… take in the whole sky… the meteors can be seen in any direction. Now, if your sky isn’t all that dark, it’s still worth going out to look. You’ll see the brighter meteors, plus the usual stars and constellations. In my backyard, I strategically position my viewing chair so that a tree blocks the nearby streetlight. It actually makes a big difference.

This year, my husband and I decided to take some time to head out in search of dark, clear skies and that 60+ peak hourly rate and possible outburst. So, tonight, our camping gear is packed, along with camera, binoculars, star charts, red flashlight, and three different kinds of mosquito repellent. Bright and early tomorrow morning we’ll head west… away from streetlights and away from city sky glow. Of course, we’ll also have to head away from clouds, and that may be the trickier bit.

For a more detailed guide to this year’s Perseids, check out Phil Plait’s post here: http://www.slate.com/blogs/bad_astronomy/2016/08/05/how_to_watch_the_2016_perseid_meteor_shower.html