Mars water or Mars ice: A case of state

It is now generally accepted that Mars has had large amounts of water and periodic mud/liquid outflows at various points in its past. What is still frustratingly not clear is how much of the water was liquid when. It is really fun to imagine that Mars once supported a comet-created thick atmosphere, warm (or at least above freezing) temperatures, and flowing oceans. If this was the past, we can imagine a watery manmade future.

The thing is, science doesn’t care what we want to believe. Science just leaves us a bunch of clues about reality and requires us to use those clues to test the reality of our imaginings.

One of the best ways to test those facts is to use computer models to see which models best reproduce reality. In an upcoming Journal of Geophysical Research (preprint), Harvard researcher Robin Wordsworth describes his teams efforts to differentiate between a past Mars covered in liquid water versus solid water (aka ice).

Here are the facts. Roughly, 3 to 4 billion years ago the environment on Mars was suitable for the formation of (among other things) water associated valley networks and fan-tailed deltas, as well as craters that are surrounded by a splash of “mud” instead of the more typical blanket of “dry” debris. (Mud and dry aren’t exactly the scientific terms, but they explain what is going on). Sharp-eyed researchers have done excellent work mapping out the general regions where these features have formed. 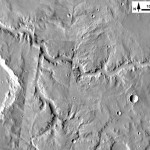 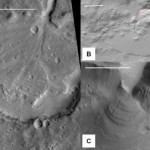 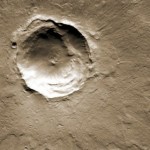 Crater in Arabia Terra with ejecta that may result from fluidization of subsurface ice heated during impact.

At the time that these features were forming, Mars had a very different tilt. Without a large, stabilizing Moon, Mars axis of rotation is able to wander up and down by 10°. At the time when these water-requiring formations were forming, Mars was tilted much further over on its side than it is today, and this would have created a colder equatorial region.

What we don’t know about this time period is… well, a lot. One of the big unknowns is temperature, and temperature plays a huge role in mediating weather, and (to a certain degree) determining how much atmosphere there even is. (With modern Mars, we can actually watch as the icy poles seasonally melt, enrich the atmosphere, and then refreeze.)

At this time, there is no perfect computer model that can match the weather record recorded in the geologic record on Mars. That said, we also can’t predict our own Earth’s current weather with all that much accuracy. It’s perfectly reasonable to have to struggle to sort what was happening 3-4 billion years ago.

What we (or rather, what Wordsworth) can do with models is predict where rain would fall (and not fall) if Mars was warm (10°C), and where ice would gather is Mars was cold (-48°C). These predictions can then be compared to the maps of where we do (and do not) see run off. 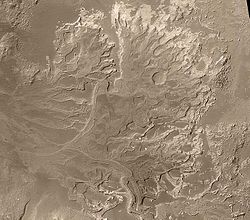 Drainage area in the Margaritifer Sinus region on Mars. If Mars had a warm/wet past, this region would have been expected to be desert.

One of the biggest mediators of rainfall is the location of mountains. As warm and wet weather fronts are compressed by mountains they create wet regions (like the Pacific Northwest and its temperate rainforests that bump against the Rockies). On the other side of the mountains, there are dry regions (like the high deserts of Colorado and Nevada, or the Atacama Desert). On Mars, no region is taller than the Tharsis bulge and its networks of volcanoes. In warm/wet models, this bulge should cause the windward/western side of Tharsis to have a wet history, and the downwind/eastern side to have a drier history. This, however, isn’t substantiated by the geology. Also contradictory are predictions that Mars Arabia region and Hellas basin should have been wet (we actually see very few drainage features), and regions like Margaritifer Sinus should be dry (but instead we see evidence water was common).

Science 101 tell us that if the evidence doesn’t fit, the theory must be wrong/incomplete. Comparison of Wordsworth’s models and reality seem in indicate our imagined warm and wet Mars never was.

We still can’t just say, “Well, Mars must have been cold,” because we still have to explain why we see so much evidence of liquid water. It’s  possible regional heating by impacts caused regional melting of ice, but it’s unclear if this can account for everything we see. This isn’t to say the idea is wrong, just that it’s unclear and we can’t just say, “If X is wrong, then Y is right”.

Science is a process, and (like cleaning your house or brushing all the loose fur from a shedding dog) it is a process that never seems to end. What’s amazing is what we do know. As recently as 2005, it was inconclusive if Mars had ever had water, and people compared models where features were shaped by windblown dust against models with flowing water. Things started to tip toward liquid water in2006 with the orbital insertion of Mars Reconnaissance Orbiter and its HiRISE camera. It was with Phoenix lander and its tenacity for digging, that we finally got evidence that yes, there is water on Mars.

Science is a process, and with new data comes new understanding. We don’t know everything, but science is moving forward.

Want to help? You can be part of finding good sites for the Mars 2020 lander to explore. All you need to do is help us map craters in Planet Mappers: Mars. (And when you find images without craters, that’s cool. Find out why here.) 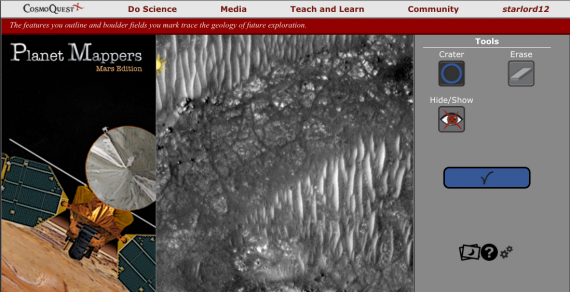 Aside: While all of this was going on with Mars, Earth was just forming its oceans (3.8 billion years ago), solidifying its first supercontinent (3.6Gyr ago), and beginning to support an environment in which life could originate (3.5 Gyr ago).