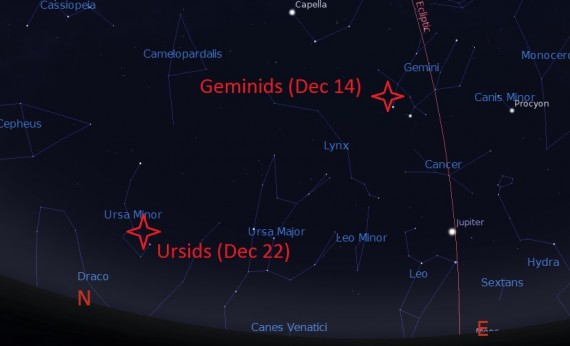 For many of us in the Northern Hemisphere, winter has settled in with some very cold temperatures. But that doesn’t keep away the most avid skywatchers. The Geminid meteor shower in mid-December is often forgotten because of its cold weather timing, but its weekend timing this year makes it particularly favorable for viewing, so take advantage if you have clear weather!

The meteors will peak the in the early morning of December 14th as Earth plows through a stream of debris from asteroid 3200 Phaethon, an asteroid once part of Pallas, one of the largest in our Solar System. Set yourself up to look towards the radiant, or apparent directions from where the meteors come, in the constellation Gemini.

As usual, David Dickinson at Universe Today has just about everything you want to know about this year’s Geminids and how to view them, including it’s odd history. But he says that this shower is worth the cold as it always delivers a nice show. Our buddy Phil Plait also has 10 great tips for enjoying your shower viewing.

So pour out some hot chocolate and tea and check out what the night sky has to offer! Not only will the Geminids be out, but Jupiter is finally poking up above the horizon at an early enough time for many casual viewers.