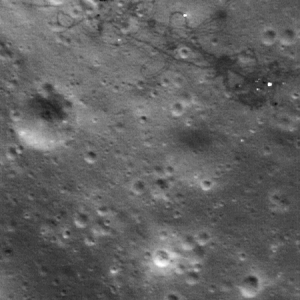 Projects like MoonMappers let you see the Moon as people have never seen it before. Though it has graced our skies for far longer than humanity was ever around, we’re so used to the side of it that faces us, that we forget about the hidden treasures.

No telescope on Earth can get the resolution that the Lunar Reconnaissance Orbiter does. At its best, LRO cameras can resolve features just a meter or two across. That’s why we’ve been able to get, for the first time since the 1960s, images of the equipment left behind by the humans of the Apollo mission.

LRO also gives a complete picture of the Moon’s surface, orbiting many times per day over the rotational poles of the Moon. However, it’s not the only spacecraft that has been sent to map the Moon in recent years. The European Space Agency’s SMART-1  spent several years in orbit before crashing deliberately into the Moon in 2006. ESA’s Space Picture of the Day commemorates that mission with a mosaic of the polar region, that which is not well seen from Earth and can only be visited by spacecraft. This trio of craters near the North Pole are at the edge of “Luna Incognita,” or the “hidden Moon.”

The north pole of the Moon can also be explored in exquisite detail from LRO’s point of view with Gigapan Moon, which we write about previously on the blog.

Explore the Moon through MoonMappers, a spacecraft image gallery, or even your backyard telescope this week and see what surprises are in store for you.