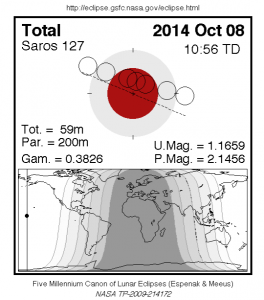 October brings us another round of eclipses for you to enjoy if you’re in the right place to see it.

First, the Moon will be eclipsed on October 8th, mostly visible from the West Coast of the US and Canada, but partially visible for the rest of the country as the Moon is setting in the early morning. The total eclipse itself will last just under an hour, and as is typical with a lunar eclipse, the Moon will appear “blood red” as the Earth’s atmosphere refracts the Sun’s light around the limb of the Earth, reflecting every sunset and sunrise from the Moon’s face. More information can be found at NASA Goddard’s eclipse website.

Later in the month, a partial solar eclipse will be visible mostly from the West Coast of the US and Canada again (lucky people!) but a little bit from the rest of North America on October 23. Don’t forget, it’s never, ever, EVER a good idea to look at the Sun. Ever. Without, of course, proper protection (UPDATE 10/6: Astronomers Without Borders has them on sale!). You can project the image of the Sun with a pinhole camera or a telescope, use properly rated solar viewing glasses, or a proper solar filter on a telescope.

Hopefully you’ll have clear skies for solar and lunar eclipse viewing this month, but if you don’t, there’s always citizen science to be done here with MoonMappers!