Last week, an important lunar anniversary occurred. 50 years ago on July 31st, the Ranger 7 snapped the first picture of the lunar surface from a spacecraft. Phil Plait marked this occasion by noting the fact that spaceflight isn’t a miracle but the combined effort of scientists and engineers and dreamers throughout the decade.

Today we’re awash in images from spacecraft, so many that we’ve recruited you to help us do the analysis and the science. And that’s great. But for so many of us, we’ve seen these images since birth, almost ,and they have become a ubiquitous part of our culture.

And then, something NEW happens. Something exciting comes along. Cassini orbits Saturn and shows us the plumes of Enceladus. We see the surface of Vesta from Dawn in exquisite detail. And today, we get a close-up view of a Comet 67P/Churyumov-Gerasimenko as Rosetta enters its orbit around it. 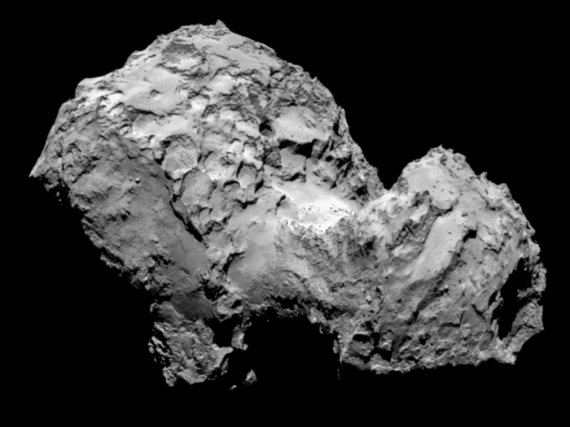 This image is 5.3 meters per pixel! ESA/Rosetta/MPS for OSIRIS Team MPS/UPD/LAM/IAA/SSO/INTA/UPM/DASP/IDA

Though we’ve seen icy moons and asteroids and comets close up before, each one is different and has its own personality. Each target is carefully selected and each object will tell us something new about the Solar System’s origins and evolution. Surely as Rosetta orbits and eventually sends a lander to its cometary friend, we’ll be learning so much about the early and present Solar System.

Next year, we’ll be seeing Pluto and Ceres, two icy dwarf planets in very difference environments, close up for the first time. The discoveries will just keep coming, as long as we keep exploring. Are you ready to learn more?