The Dawn spacecraft has given us stunning images of Vesta to work through on the Asteroid Mappers project. It’s also given some key data about the interior and history of this huge asteroid.

Vesta is the second largest asteroid in the Solar System, meaning that it is very much like the planetesimals, or embryos that later formed the large planets we see today. It is also differentiated, in that it has a crust, a mantle, and a metallic core. Scientists from the Swiss Federal Institute of Technology in Lausanne have recently determined that the crust of Vesta is quite a bit thicker than was previously imagined, 80 km (50 mi) thick rather than 30 km (19 mi) thick. 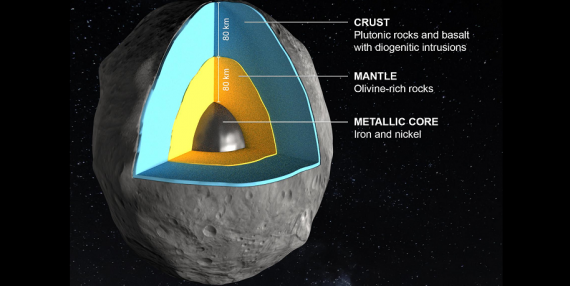 That means that the world-shattering impacts that make up the large basins at Vesta’s South Pole, Rheasilvia and Veneneia, didn’t dig into the olivine-rich mantle, and there’s not much olivine on the surface of Vesta, as seen by Dawn. A new model of Vesta’s makeup means adjusting the models we have of planet formation to take into account a different mix of minerals and difference sizes of the crust and mantle.

But don’t just take my word for it. Here is the story in a short video from one of the researchers, Harold Clenet:

With Dawn still on its way to Ceres, let’s not forget that there’s still lots more science to be done with the data from Vesta!