A Surprising Historical Discovery on the Moon 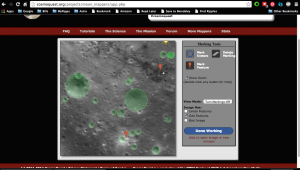 The Lunar Reconnaissance Orbiter (LRO) continued to dazzle us with high-resolution views of the lunar surface. It had the first camera with fine enough angular resolution to actually image the spacecraft left at the Apollo landing sites. If you are working with MoonMappers long enough, you might even come across an image of the Apollo 15 landing site, as I have twice in the last couple of months. Note the lovely curves made by the lunar rovers that the astronauts drove around the terrain. Apollo 15 was the first mission to use a lunar rover, and it enabled the astronauts to travel further than ever before in their explorations of the surface of our nearest neighbor and satellite.

This week, LRO released images showing the tracks of the Lunakhod 2 rover, still pristine after the rover made its exploration of the Moon in 1973. 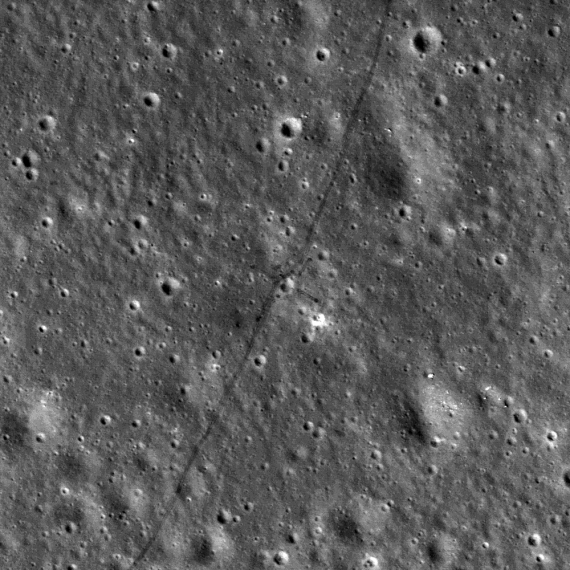 Lunakhod 2 was already a record breaker at the time, having reported traversing 37 kilometers (23 miles) during its five months in operation. It science payload was not well known to the US at the time, but we now know that is took magnetic field measurements and used several cameras to study hilly terrain and a linear depression known as a graben, or rille. At times, there was a conflict between the desire to be the most far ranging rover at the time and the desire to study more interesting geological phenomena. This led to a few back and forth maneuvers that, now accurately mapped by LRO, show that the rover actually travelled a longer distance that previously though, 39 kilometers (24.4 miles)! Researchers from Moscow State University and Washington State University used new controls and the latest LRO data to follow these tracks. 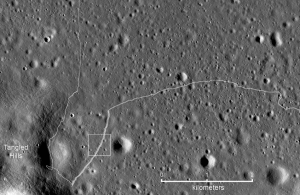 Detail map of the SW portion of the Lunokhod 2 traverse. White box indicates the location of the featured image. Credit: NASA/GSFC/Arizona State University

You can read the account of the conflict by Lunokhod 2 deputy Science Team lead Dr. Alexander “Sasha” Basilevsky on the NASA SSERVI page. The small map here shows where in its path the rover backed up and retraced its path due to the conflicting interests! You can also check out a timeline of lunar exploration curated by out Education Team at the new Explore section of the CosmoQuest site at Luna Mission timeline page.

As our imaging instruments get better and better across the solar system, we are treated to a growing array of pictures of spacecraft as taken by other spacecraft. Just a reminder that we are living in a very, very cool time for planetary exploration!

← Thanks, Balticon #TBT: Perspective on the Apollo 15 Landing Site →