Here is some more interesting news coming out about Mercury from the MESSENGER spacecraft. 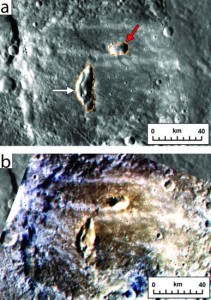 Two pyroclastic vents on the floor of Mercury’s Kipling crater, top, would likely not have survived the impact; they are more recent. The false color image of the same spot, bottom, marks pyroclastic material as brownish red.

It was long thought that Mercury didn’t really have major, explosive volcanism in the past, like the Mount St. Helens eruption of 1980. For that, you need volatiles, or compounds that boil at relatively low temperatures, astronomically speaking. When the planets were forming around the nascent Sun, most of the volatiles of the inner solar system were boiled off before inner planets fully formed. Lucky for us, comets and asteroids delivered all the volatile materials, like water, that we have on Earth today, and the same for the other inner planets. Apparently, they didn’t skip Mercury.

New evidence from MESSENGER suggests that Mercury held on to these volatiles for some time before they were blasted out in volcanic outbursts. Planetary scientists studied the evidence of such explosions in pyroclastic ash. These pyroclastic deposits showed different amounts of weathering, thus were likely different ages. So, there was a sustained period of volcanic activity on Mercury.

Not only that, some of the volcanic outbursts happened on the floors of large craters who can be dated by the amount of erosion they have suffered. The most recent ones occurred one billion years ago, just the other day in geologic time. This makes it seem unlikely that Mercury has shed its outer layers in some catastrophic event in the early solar system, one hypothesis raised to explain why Mercury has such a HUGE iron core. Together with growing evidence of water on the Moon today, it seems that the “dry, lifeless” rocks of the inner Solar System aren’t so dry after all.

Check out some of these amazing impacts and volcanic features for yourself with Planet Mappers. We’re still working to map the surface of the planet using MESSENGER data, including marking the sizes and distribution of craters to figure out surface ages. You’ve already gotten it started for the Moon and proved yourselves to be worthy mappers! 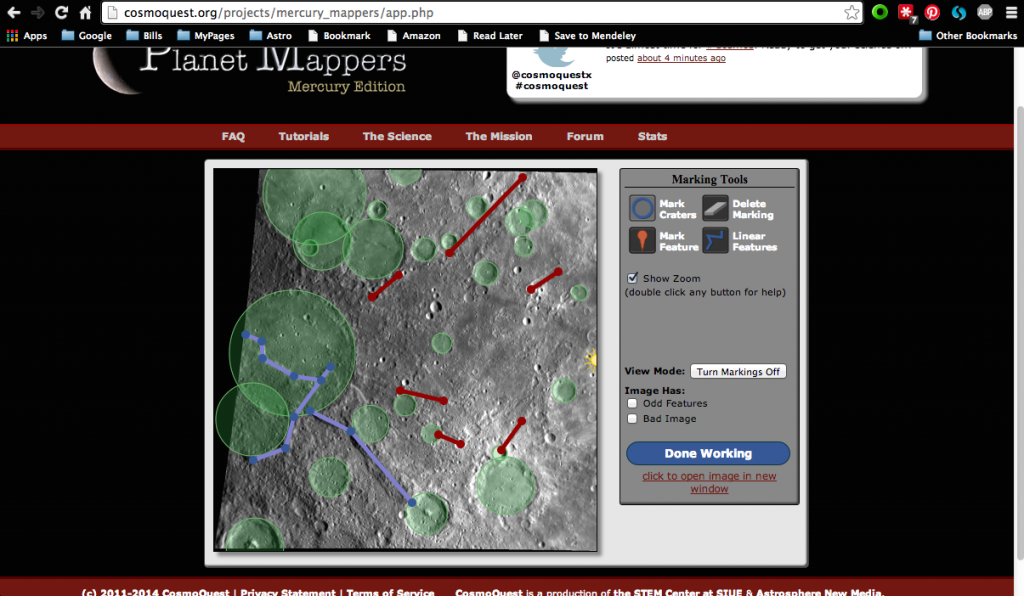 Some recent Mercury mapping by Nicole