TL;DR: A white dwarf supernova was just discovered in the nearby starburst galaxy M82. Details are still coming in, but this will be an excellent chance to study this type of system up-close, plus it may come within visual range of your backyard telescope. And here it is, courtesy of @NickAstronomer 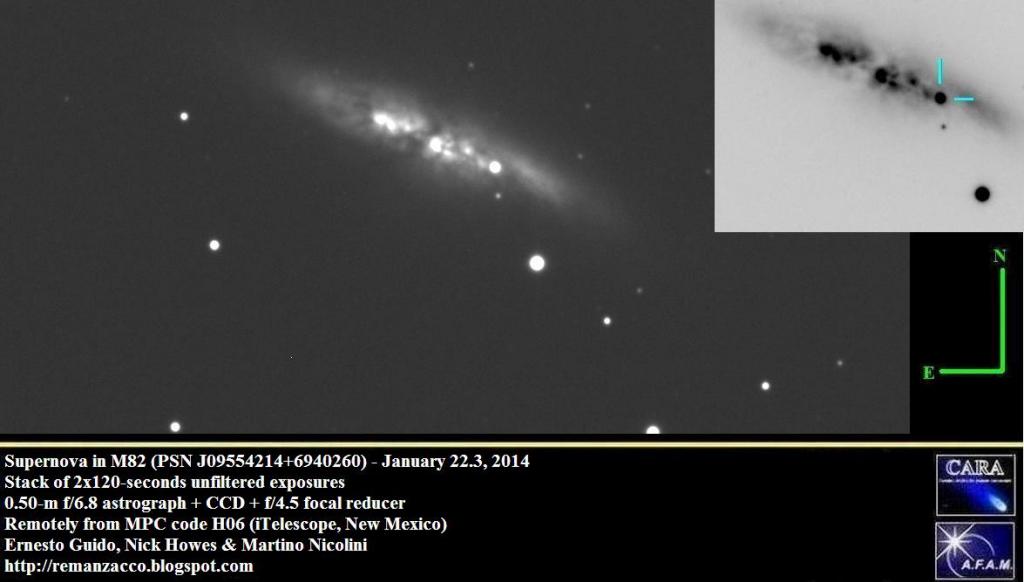 I should have been sleeping, but I wasn’t and I decided to check Twitter which is usually a bad idea at 5:30am, but then I started seeing tweets like this… 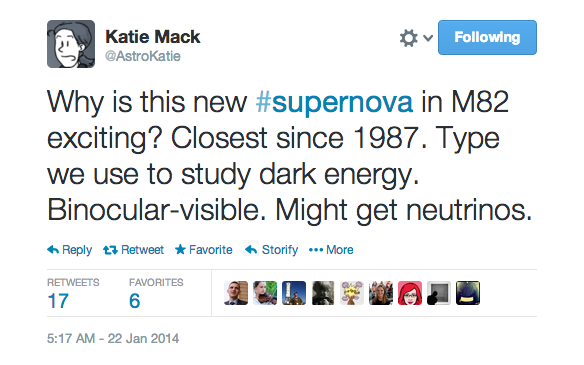 @AstroKatie: Why is this new #supernova in M82 exciting? Closest since 1987. Type we use to study dark energy. Binocular-visible. Might get neutrinos.

Okay, NOW I’m awake. A longtime source of news about transient phenomena in the sky, the Astronomer’s Telegram, now has a Twitter account which posted this brief by Cao, et al. I’ll quote some important bits:

Okay, let’s break this down a bit. First of all, our long-monikered supernova has been given the spectral classification of Type 1a. Generally this means that the spectrum doesn’t show hydrogen but does show ionized silicon early on. What that really means is that the supernova occurred as the result of a white dwarf in a binary system taking on way too much material and blowing itself apart. This is different from a core-collapse supernova, in which a massive star runs out of nuclear fuel and blows itself apart.

Type 1a supernovae have distinguished themselves as standard candles in astronomy. That means the luminosity of these explosions is well known and can be figured out from measuring the light curve, or brightness with time. Get the actual luminosity of the supernova, and you can measure its distance. This makes such supernovae important in the “distance ladder” of astronomy; and they were key in the discovery of the accelerating expansion of the Universe due to dark energy.

I have to admit that I agree with some of the Twitter commenters with regards to this classification. It’s… odd. M82 is the nearest starburst galaxy to us. That means it is producing new stars at a prodigious rate. When you have lots of new star formation, you get massive stars going BOOM as core-collapse supernovae, whereas the white-dwarf supernovae can happen just about anywhere there are old stars (which happens to be just about anywhere there are any stars.) So although it is intuitively weird that this exciting nearby, visible supernova in a starburst galaxy is a white-dwarf type and NOT core-collapse, who are we to question nature if it wants to give us such a gift. (Assuming the classification holds.)

Why is this such a gift? I mean, other than the fact this THIS IS COOL. Type 1a supernovae make good standard candles because white dwarfs all tend to blow up right at about the same point near the critical or Chandrasekhar mass. However, there are slight variations, and the amount of heavy elements in the progenitor white dwarf could mess around with such a standard. So it’s really important to get to study this one up close. (And yes, 12 million light years IS close to some of us.)

Another point from the telegram is that they tried to match the spectrum to known supernova profiles from the past. The best fit was a particular supernova from 2002 at “-14 days.” That means a full two weeks before that one hit its peak brightness. Which means? This sucker is only going to get BRIGHTER. This is what is leading many to think that it will be in reach of smaller telescopes and possible even binoculars in the coming days. Estimates put its possible peak brightness at magnitude 8. You can bet that I’m excited to try for it with our STEM Center’s 8-inch telescope as we start up our spring semester observing! (Seriously. Thanks, Universe!)

I love the final statement, “Panchromatic follow-up is encouraged.” That’s the astronomer’s way of saying, “SRSLY EVERYONE GET YOUR TELESCOPES ON IT NOW!” All colors, all wavelengths, let’s see what surprises this has in store for us. 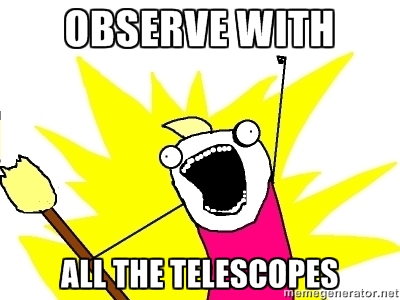 With props to Allie Brosh

P.S. I just realized we might be getting some new readers coming to check out this topic thanks to my overactive tweeting. Hello! Welcome! We’re more than a blog, we’re a citizen science project where YOU can help us do science right here in your web browser. We hope that while you’re not out trying to see M82’s new supernova you’ll spend a few minutes exploring the Moon, Vesta, and Mercury and helping us to classify craters and geological features. Thanks!