TL;DR Version: We moved into a smaller space. We’re giving away stuff. You can have it… If you do science (at least 100 images) or are an established or senior member of the forum. 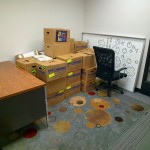 Before: Load 1 of 5 from the movers 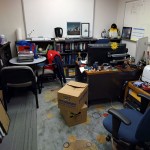 And now for the rest of the story…

The CosmoQuest build team are more or less co-located at Southern Illinois University Edwardsville, where we are part of the STEM Center: A research center that works to define effective ways to get people engaged in science. Up until mid-December, we were located in SIUE’s old science building (and until recently, its only science building). Thanks to funding from the State of Illinois, our university was able to build a new building for all the wet sciences (biology, chemistry, etc – all the folks who require sinks), and the old building is, for the next N months (where N ≥ 18 months) get renovated for us.

I knew moving was going to be trying and eat a lot of our time, but I didn’t fully grasp the reality of how much we were moving. It turns out all of us are really good at three-dimensional Tetris, and there may have been a couple Tardis involved.

So… we were (I was) overly optimistic. It is now a month later and most of our offices are at least no longer danger zones (because we were livin’ in the Danger Zone). I still have 5-10 more boxes at home that need to come in … but I need to get rid of some stuff first. Nicole is in a similar plight. Our new, temporary, digs are way smaller than where we were, and our future digs are (in N, where N ≥ 18 months) not going to be any better. We both had collected stuff to give away and… now is the time.

Do you want some stuff?

Seriously, we’ve got some stuff we can send you! And I found a bunch of stamps while I was cleaning, so… Yeah, I have stuff I can send you. (The diffraction glasses were already claimed).

I’m going to be posting stuff on this thread on the forums. If you see something you like, AND you have over 100 or more images classified in CosmoQuest or be an Established Member of the forum, you can say “Want!” in the comments. I’ll use a random number generator to pick the winner of each item. I’m going to give you until Feb 1 to claim things, so you have time to do science if you need to. And, for folks with over 1000 classifications or who are Senior Members of the forum, we have some heavier weight stuff like T-Shirts even. If you live overseas and can help pay for postage, I’d adore you, but… mostly we just want to give you stuff.

So… Go do some science? (There is no fast way to get established on the forum.)

Oh – And pictures of the move are on Google+ (no login required).

For reasons that make no sense, we’re in offices tucked away in the student fitness center, but that’s a tale for another blog post.

Need to know how many images you’ve viewed? Login and click over to here.