The Shadow of a Planet

Greetings, all, from Indianapolis where the 222nd American Astronomical Society meeting is just about wrapping up. And a AAS meeting means that there will be lots of talk of exoplanets. In fact, the event kicked off with a plenary talk about transiting exoplanets by David Latham called “The Search for Habitable Worlds.”

The talk focused on the transiting method for detecting and characterizing worlds outside the solar system. This occurs when the system is aligned just right with respect to our point of view such that the planet crosses in front o the disk of its star. This is detected as a brief dimming, or dip, in the star’s light. Though not the first or even the second method used by astronomers to discover exoplanets, it has since become a prolific method thanks to fleets of small, ground-based telescopes that monitor stars for dimming and the successful Kepler mission which has been staring at one part of the sky for over three years. In fact, as of this writing, there are 866 confirmed exoplanets and 2713 Kepler exoplanet candidates. 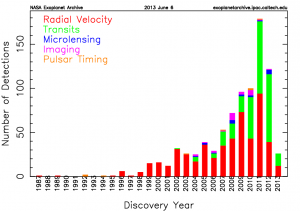 Exoplanet discovery count per year and sorted by detection method, from earlier this year by the NASA Exoplanet Archive

Latham took the audience back to 1999 when a project cleverly called STARE (STellar Astrophysics & Research on Exoplanets) was coming together to use a relatively small telescopes to monitor stars with exoplanets for transits. As Latham tells it, he suggested to Dave Charbonneau the star HD209458 for a learning and calibration run with the telescope. It was known to have an exoplanet, and, lo and behold, that first run became the first observation of a transiting exoplanet. The first exoplanet to be discovered via the transit method would not come until 2002.

We then fast forward up to the Kepler mission, designed to deeply survey a small part of the sky over several years to determine the population of exoplanets in our Galaxy down to Earth-sized planets. More romantically, perhaps, it has been described as a mission to find Earth’s twin. The results of Kepler were highly anticipated, as I remember being in a packed session the first morning of a past AAS meeting as astronomers from all subfields eagerly awaited the first results. Since then, there seems to be a news item every week about some bizarre or familiar seeming exoplanet. Decades into the  era of exoplanet discoveries, we are still fascinated by these objects in the Galaxy that are both so alien and so understandable.

The plot below was shown by Lantham to illustrate how Kepler’s detections have been finding smaller candidate planets with larger orbits, as to be expected as the mission went on through the years. No true “Earth twin” has yet been found (that would be at the far bottom right of the plot), though many worlds have the potential to be in the habitable zone around their stars. As the mission moved into its extended mission, it became clear that there were many more planet systems being detected than were originally expected. The orbits are just so aligned to us and to each other so that we see multiple planet transits for a single star. 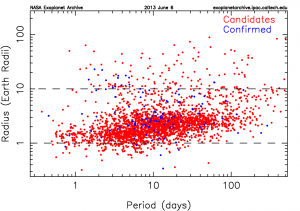 Kepler candidates and confirmed exoplanets on a plot of rotation period on the horizontal axis and planet radius on the vertical.

The “poster child” for this is the system around Kepler 11. Astronomers have detected three planet candidates in transit that all orbit very close to the parent star. In this scenario, something very interesting can be observed. These planets gravitationally interact with each other in a way that allows you to measure the mass by very carefully timing the transits. With the radius, or physical size of the planets also measured by the transits, you get an idea of the density of the planet, which gives a clue to its composition. These planets, and many others seen by Kepler, would be “fluffier” than rocky worlds, small but probably full of ices rather than rock. They are not like the terrestrial planets in our solar system, but not quite the ice giants like Neptune and Uranus, but something in the middle. This is an interesting discovery about the general population of exoplanets in our Galaxy that couldn’t be made without Kepler. Nevertheless, a few truly rocky worlds have shown themselves, and Kepler 36b was named as an example of such after its mass was measured while it danced around its star with Kepler 36c.

I should point out that only 132 candidates have been confirmed to date. That’s less than 5% of the detections. However, there is high confidence within the field that a large fraction of these candidates will be confirmed. There’s nothing wrong with the Kepler data itself, but there is a bottleneck in being able to confirm them all in a timely matter with ground-based telescopes. In fact, one particular instrument that would have been good for candidate confirmations, HARPS, was located in the Southern Hemisphere and was thus unable to observe the Kepler targets in the constellation of Cygnus. So the astronomers decided to make a duplicate, but slightly improved HARPS-N in the Northern Hemisphere which achieved first light in April 2012. (HARPS stands for High Accuracy Radial velocity Planet Searcher.)

How to observe an exoplanet atmosphere, by Sarah Seager.

The next exoplanet space mission being planned is TESS, the Transiting Exoplanet Survey Satellite. It is often called the successor to Kepler, but its philosophy is slightly different. Instead of a deep survey of a small region of space, it will cover large swaths of sky, looking for exoplanets transiting the brightest stars. This will allow for easier follow-up observations with ground-based telescopes, since brighter stars can be observed with less time and more accuracy. Transiting exoplanets are incredibly important to understanding exoplanet atmospheres. These can be seen by absorption of light from the star when the planet is in front, but it can also be observed as the planet is about to disappear behind the star so that we see the reflected light as a small addition to the stellar light. To do spectroscopy, you need a fairly bright source, more so than what is needed for a transit detection. Thus, targeting the brightest stars for potential exoplanets makes sense. TESS will pair with the biggest telescopes of the next generation, such as the James Webb Space Telescope or Extremely Large Telescope for detailed follow up of theses exoplanet atmospheres.

There wasn’t much talk about the fact that Kepler is down with too many failed reaction wheels, but with the huge amount of candidates still to be confirmed and followed up on, there is no shortage of work to be done. As my friend Amy Shira Teitel pointed out a few weeks ago, it’s already into our extended mission, and we’ve gotten an incredible amount of science, even if “Earth’s twin” still remains elusive.

2 Responses to The Shadow of a Planet