We’ve been hard at work over the last few weeks processing all the data from over 1000 of you volunteers so far. These data have been used to create a poster presentation that has been hanging in the room at NASA Ames amongst other science posters this week at NASA Ames for the Lunar Science Forum. The purpose of this post is to talk a little about some of the results so far. 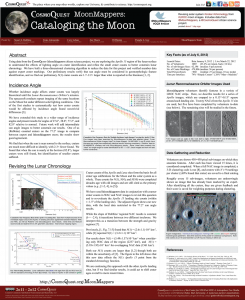 First off, I’m going to talk briefly about the right-hand column which is more background information than science. In the top left, there are some user statistics. Please do NOT treat the time information as “this is how long you should be taking.” There is no “right” nor “wrong” amount of time to take for any given image – this is more for our own information so we have a better idea of what’s going on, and it’s something that scientists in the community are interested in.

The next section talks a little about this project, while the “Data Gathering …” part I’ll be going into more detail in a future blog post (maybe in a week or so). It describes, in very brief language, how we go from your nearly 500,000 crater markings to a reduced catalog of craters that we can then use for science (the left side of the poster).

On the left side, there are two main sections in addition to the abstract.

The first section, Incidence Angle, discusses one of the major first science questions of the MoonMappers project: What images should we be using? The camera we’re using for this project has taken over 500,000 images of the lunar surface, and the sun has been at all sorts of different angles relative to the surface during the last three years of orbit. Some sun angles are going to be better than others for identifying different features. We’re trying to constrain what the best sun angles are for our different future projects. The results so far are already gathering good data, and we’re only 1/4 of the way through the images for this location!

Perhaps a key thing to point out in the graph that accompanies this section is the turquoise and blue data. These are statistically identical – all the data points overlap within each others’ error bars. The turquoise data are my crater counts for this particular image, while the blue data are yours. The fact that they agree very well is of key importance because it means that, as a combined effort, your crater counts are just as good as an expert’s.

While the rocks that were collected have been re-dated many times over the past 40+ years, the crater counts in these areas have never really been re-examined. These counts versus ages are shown in the bottom graph of this section. I should note that the above statement has one major caveat: A major paper was published just a few months ago where a team re-did the Copernicus crater counts and revised the crater density down so that data point better fits the red curve.

Anyway, my latest project is to re-do the Apollo and Luna crater counts, starting with Apollo 15 since that’s one of the regions we’re looking at first with MoonMappers. I needed some wider shots of the area, so I used a different camera on the Lunar Reconnaissance Orbiter to count craters in the region. Those are the red/orange points on the top graph in this section. What’s very neat with regards to MoonMappers is that the MoonMappers data (blue points) that are much more “zoomed in” on the landing site precisely fits with the coarser, more regional crater counts.

Anyway, the bottom-line for this particular investigation is that I found that my crater counts show that the old counts from about 1975 are inaccurate in light of modern data. This means that the data point of how many craters are present per square-kilometer in the Apollo 15 landing site is different from what everyone’s been using for nearly 40 years. And that means that ages we’ve been concluding based on craters elsewhere for nearly 40 years may be wrong by half a billion years.

This is still incredibly preliminary, and the sentence directly above may be a slight exaggeration, but this does have the potential to revise our understanding of the chronology of the solar system quite a bit. For example, if the chronology is revised, and it shifts everything by, say, a factor of just 10%, that means that the major valley networks on Mars didn’t flow around 3.6 billion years ago, but more like 3.2. It means that the last major volcanism didn’t occur around 100 million years ago, but more like 50. This means that the planets may have been active more recently, and it raises the prospects for discovering life elsewhere in the solar system.

All with supporting data from MoonMappers that you are helping to gather.