Introduction to the Basic Mapping and Crater Identification Task

Welcome again to CosmoQuest’s Moon Mappers project. You may be wondering what you’re doing here – what we’re trying to figure out with this work. Hopefully this post will answer some of your basic questions.

In Moon Mappers, you’re presented with a simple interface that asks you for its main task to identify craters. If you happen to see any other interesting features, we ask you to identify those, as well, but the focus is on craters.

Why do we care about craters? Craters can tell us a lot about what’s going on on a planetary surface. One of the main uses of craters is to tell ages. On the moon, we have a chronology that tells us that a surface that has a certain number of craters of a certain size will be a specific age. The basic idea is that if a surface has been around longer (it’s older), it will have accumulated more craters.

So, let’s say that with Moon Mappers we find that one image (Image A) with an area of 1 km2 with 10 craters that are 100 meters in diameter. Another image, Image B, has the same surface area but only 3 craters that are 100 meters in diameter. Based on these, we can say that the surface in Image A is older than the surface in Image B. What we just did is to assign these relative ages – one surface is older relative to another.

To give these absolute ages, we have to use published models that are calibrated with absolute ages derived from radiometric dating of Apollo and Luna sample returns. But that’s a subject for a different blog post. 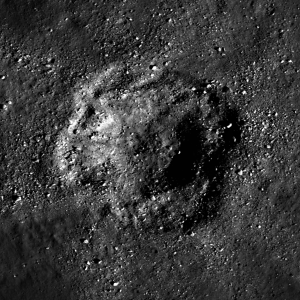 So one of the main tasks is to generate catalogues of craters for age dating. Another reason we’re interested in craters is to study the cratering process and what different kinds of craters can tell us about the surface on which they formed. For example, there is a type of crater called a “concentric crater” which looks like one crater lodged inside another.

While it’s possible that these are two separate craters that formed independently, the more likely case for small craters is that the surface on which they formed is highly layered. There’s a soft layer on top and a firm layer below it. When the explosion that formed the crater happened, the material at the surface was easier to vaporize and blast away. When the explosion reached the contact between that and the more firm material below, it had issues getting through – it took more energy. So, the resulting crater in that part is smaller. This gives the crater what’s been popularly termed a “bench crater” but more properly known as “concentric crater.” Finding these can help us figure out what the surface of the moon is like in different areas.

These are just two examples of why we want to identify, measure, and classify craters on the moon. As Moon Mappers gets going, we’ll post about more of these applications and science projects.