Cosmic Castaways: Getting Started with Blender 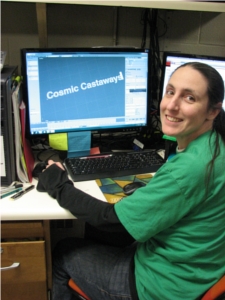 In the next series of postings, we will focus on Annie Wilson, our animation guru, who did an enormous amount of work on Cosmic Castaways. Take it away Annie! 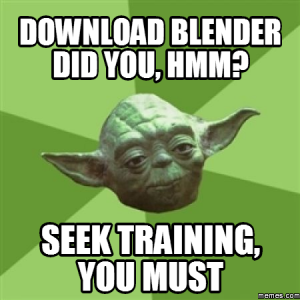 So you want to learn how to use Blender to create fulldome videos.  May the Force be with you.

Getting started with Blender

I’m going to assume that you’ve downloaded the lastest version of Blender.  More builds are available at GraphicAll.org but they are customized (and sometimes experimental) and chances are that you won’t need anything beyond the trunk version available from Blender.org.

Register for (or at least bookmark) CGTextures, OpenGameArt, BlendSwap, BlenderArtists, and Blendertarium.  You’ll use at least one of these sites during the course of a project.

If you have the money or opportunity to get Blender training, do it.  Professional training materials are usually very easy to follow and sometimes come with freebies that you can use in your own projects. We purchased the platinum package for Blender Guru’s Nature Academy.  Blender Foundation also sells training materials on DVD, most of which focus on animated creatures or people.  Blender Cookie requires a modest subscription for full access to all of their courses.  For planetarium-specific training Blender workshops are sometimes offered at conferences.

If you don’t have the money, don’t despair!  Most of the training material out there is available as free tutorials.  Browse BlenderGuru and do web searches for Blender tutorials.  Having problems finding current tutorials?  Add the version of Blender that you are using to your search.

There are multiple rendering engines in Blender: Internal (Blender Render), Game, and Cycles.  Do yourself a favor and focus on learning Cycles.  The internal render engine is no longer in development and support may be dropped entirely.  The good news is that most features that were previously only available with the Internal engine are now available with Cycles.

Now that you’ve downloaded Blender, bookmarked your resources, and found your training of choice it’s time to make things!  Ensure that you won’t have any interruptions for a couple of hours and start with something very simple.

Tips for working on a project

Remember: “Animate everything!”  If you can think of it, it can probably be animated.

See all posts by Annie

2 Responses to Cosmic Castaways: Getting Started with Blender