See all posts by prdurrell

Astronomer and an Professor in the Department of Physics & Astronomy at Youngstown State University. I am also the Director of the Ward Beecher Planetarium. I study stars and star clusters in nearby galaxies, and use that information to understand galaxy formation and evolution. I am also interested in intracluster stars - stars that lie in the space between the galaxies

While there is now a large number of truly breathtaking full dome planetarium shows (covering a wide range of scientific topics) available to planetaria worldwide, there is clearly a need for low-cost (or even free) full-dome content, to allow planetaria to stretch their programming capabilities.   With this goal in mind, Science on the Half Sphere […] 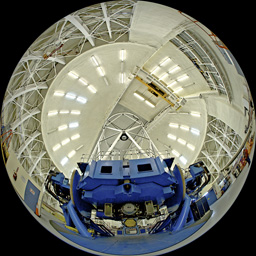 Science on the Half Sphere is an initiative to both develop and to distribute materials that will be useful for fulldome media, which is being used more often at planetaria worldwide. SotHS is a collaboration between faculty, staff and students at the Ward Beecher Planetarium (at Youngstown State University) and CosmoQuest. The goals of SotHS include providing free fulldome (images taken through a 180 degree fisheye lens, or images that have been appropriately ‘warped’ in a similar way) content that can be used by other planetaria with fulldome media systems.