Gravitational lensing, a new computer model of the universe, and a pulsar stripping its neighbor star

Today’s news includes seeing the Sunburst Arc galaxy via gravitational lensing, a new computer model that has 20 billion particles representing the various types of matter in the universe, and a pulsar that is gravitationally stripping material off its neighbor star and igniting in a blast.

Today’s news starts with another story of a galaxy on repeat. The Hubble Space Telescope has imaged a distant galaxy whose light comes to us thanks to the gravitational lensing of an intervening massive system. The distant system being lensed in this story has been named the Sunburst Arc, and it is located almost 11 billion years from us. Gravity and large systems can bend light that would normally go somewhere else to instead come toward us. In this case, a massive cluster of galaxies 4.6 billion years away is bending light toward us, like sunlight passing through a lens, and like a lens, it increases the total amount of light we receive, allowing us to see things that would otherwise be far too faint.

This amplified distant light forms parts of circle, with twelve different stretched versions replicated 12 times. This kind of data is often used as a cosmology tool, where the science comes from comparing the different light paths taken by the replicate images. In this instance, it’s actually the image itself that is exciting. The light from this particular galaxy was released when the universe was still very young and in the process of transitioning from the era of opaque neutral gas that we call the “Dark Ages,” to the transparent ionized gas phase that describes the bulk of the history of our universe.

We are still trying to understand how the first stars turned on and how their light was able to push out galaxies and ionize the space between galaxies, and while there have been a number of theories, there has only been a small number of observations of how this has worked. With the Sunburst Arc, astronomers can add one new example, and this example nicely shows how high-energy photons can, according to the press release, “leave the galaxy through narrow channels in a gas rich neutral medium. This is the first observation of a long-theorised process.”

The kind of science being done in this research is a new example of researchers using indirect ways to observe objects in the early universe. It is hoped that JWST may someday be able to directly observe this stage in our Universe’s history, but until then, massive galaxy clusters are the lenses we have and it’s awesome to see how people are using them. 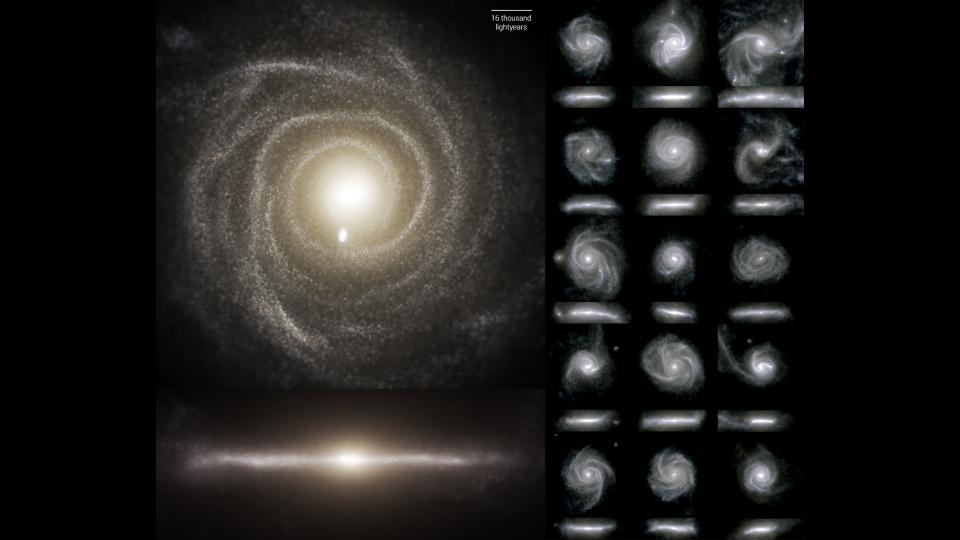 While our ability to image our earlier universe is still limited, we have enough information to constrain models that let us explore in our computers the things that we can’t see with our telescopes.

Models have been around for as long as there have been computers, and have been growing in complexity. Computing is a limited resource, however, and until now models have either focused on either the one or 2 galaxy scale, or cosmological scales in which the effects inside individual galaxies are lost.

A new paper in the Monthly Notices of the Royal Astronomical Society presents a model that manages to span both scale sizes, thanks to the Hazel Hen supercomputer in Stuttgart, Germany. For more than 1 year, 16,000 cores focused on how a 230 million light year across cube of the universe would evolve across the age of the universe. This model included 20 billion particles representing dark (invisible) matter, stars, cosmic gas, magnetic fields, and supermassive black holes. Led by Dr Annalisa Pillepich of the Max Planck Institute for Astronomy and Dr Dylan Nelson from the Max Planck Institute for Astrophysics, this team was able to discover new effects in galaxy evolution that appear to be a true part of the story of how our universe changes over time. Since we can’t watch a galaxy evolve, seeing what happens in software is key. What is beautiful in this simulation is that it is confined to match what effects we see and in the process of recreating what is known to happen, the simulation revealed a number of effects that hadn’t been seen before. Now that we are in the awesome place of having matched our models to what we have seen so far in the universe, we get to see if future observations match the new things we’re seeing in the models. 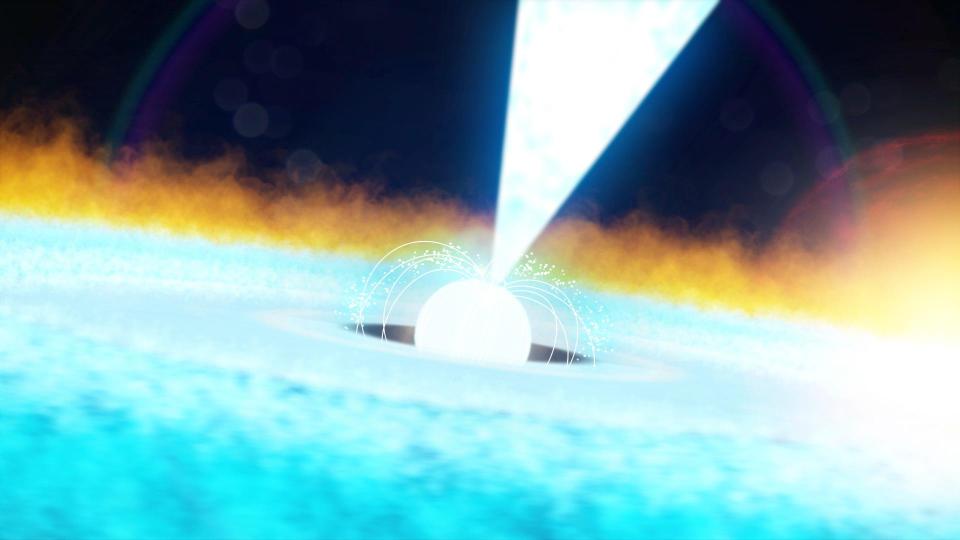 For our final story of the day, we’re going to jump from looking evolving galaxies to looking instead at a single dead star.

SAX J1808.4-3658 is a neutron star located 11,000 light years away in a  binary system with a brown dwarf companion. Rotating 401 times per second, this collapsed stellar remnant can be called a pulsar, and is several times larger than the sun in mass, but closer to the size of Manhattan Island in diameter. The pull of gravity on the surface of this exceedingly dense object is actually enough to generate nuclear reactions in material falling on to the surface. This exact kind of sudden fusion was observed by the NICER telescope on the International Space Station. This particular pulsar is gravitationally stripping material off its diminutive neighbor, and when enough matter builds up, it ignites. This what happened on August 20, when a single 20 second event gave off as much energy as the Sun gives off in nearly 10 days. These kinds of cannibalistic stars are remarkably complex, and if our slow news trends continue, we’ll be doing a deep dive into their Science on Monday.

That rounds out our show for today.

Thank you all for listening. The Daily Space is produced by Susie Murph, and is a product of the Planetary Science Institute, a 501(c)3 non profit dedicated to exploring our Solar System and beyond. We are made possible through the generous contributions of people like you. If you would like to learn more, please check us out on patreon.com/cosmoquestx. During the month of November we are running a special fundraiser to support our server costs for 2020. We project costs of $1450 for all of our websites. If you would like to help us reserve our place on the internet, you can donate at streamlabs.com/cosmoquestx. Your donations are tax deductible where allowable in the world.

Each live episode of the Daily Space is archived on YouTube. If you miss an episode here on Twitch.tv, you can find it later on youtube.com/c/cosmoquest. These episodes are edited and produced by Susie Murph.

We are here thanks to the generous contributions of people like you who allow us to pay our staff a living wage. Every bit, every sub, and every dollar committed on Patreon.com/cosmoquestx really helps. If you can’t give financially, we really do understand, and there are other ways you can help our programs. Right now, the best way you can help is to get the word out. Let you friends know, share our channel to your social media, or leave a recommendation. You never know what doors you are opening.