It is the most Monday of Mondays, and starts out with Mars spitting out a probe. Seriously. From there, we learn how Hygeia escaped collision and earned dwarf planet status, and how modifying gravity may make modeling our universe finally possible.

Today is the most Monday of Monday’s, especially if you work on the Mars Insight Thermal Mole. Over the past many months, we’ve been following the adventures of this self-hammering probe as it tries to bury itself 5-meters beneath the surface of Mars. 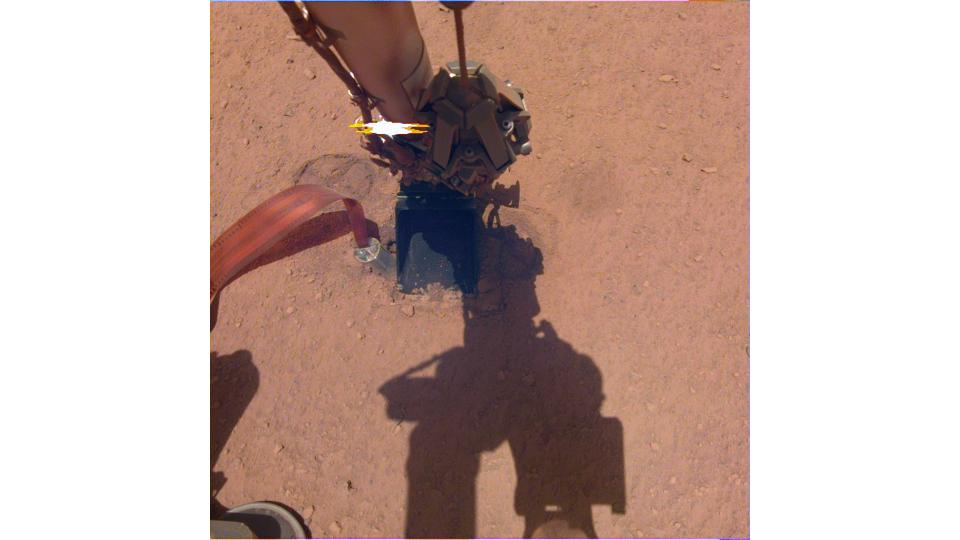 This weekend, Mars spit the probe out. There is really no other way to describe what happened.

This probe is designed to so use static friction to hold itself in place while it draws up a weight, and then it hammers that weight down, theoretically allowing it to hammer itself ever downward. After its initial deployment, it got stuck and for several months people on Earth experimented in sandboxes to both replicate the problem and figure out how to solve it. In the most recent trial, it was guessed that the hammer had a mostly hollow area of space around it, and it just didn’t have enough friction to effectively drive it self down ward. To get around this, they tried putting sideways pressure on the probe with the Insight Lander’s scoop. This worked temporarily, allowing the probe to descend centimeter by centimeter for a few centimeters… And then, for reasons that aren’t yet known, the probe was sent backwards out of its hole. Mission engineers are now trying to figure out if they can safely move the Insight’s shovel, and they are trying to sort out how to get this probe to do something.

I’m not going to lie, I burst out laughing when I say the animated gif user LarsTheWanderer shared over the weekend of the publicly released gifs. If you were to ever imagine a planet going “Nope, I will not be probed!” this is what it would look like folks.

My heart goes out to everyone working on this probe. People have been waiting years for this data and it would not be unusual for there to be scientists whose funding is related to this mission returning data. I can only hope that someday, they can laugh at Mars spitting out their probe while publishing amazing papers about whatever it is that caused this to happen. 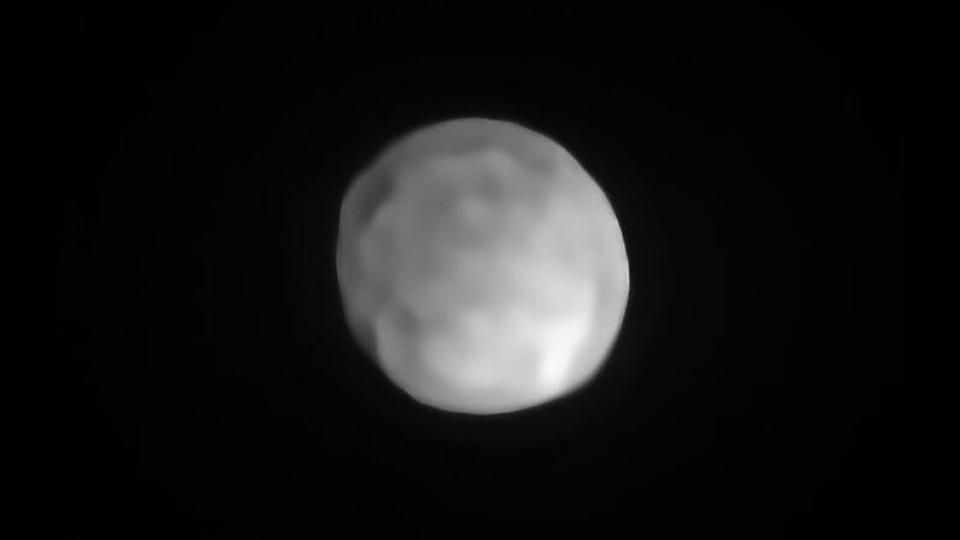 In other solar system news, the Very Large Telescope in Chile has imaged the Hygiea asteroid. This small rocky object is the 4th largest asteroid, behind Ceres, Pallas and Vesta. While Pallas and Vesta are both flattened out of being spherical, Hygiea appears quite round in images obtained with the SPHERE instrument on the Very Large Telescope. This unusual shape makes Hygiea the smallest of the known dwarf planets. To be designated as a dwarf planet, a world needs to be orbiting the Sun in a belt of other objects, and it needs to be a sphere. Now, it may be a bit of a fluke of luck that Hygiea appears to be a dwarf planet while Vesta and Pallas do not. In the VLT images, there are no clear impact basins, and it appears this world escaped the massive collisions that reshaped Vesta and probably also Pallas. Had we been able to see all three of these objects early on in the Solar System’s history, we might have classified Vesta and Pallas differently. At this point in time, however, they are not dwarf planets, and little Hygiea, measuring just 430 km across, wins the record for smallest dwarf planet  by several hundred kilometers. 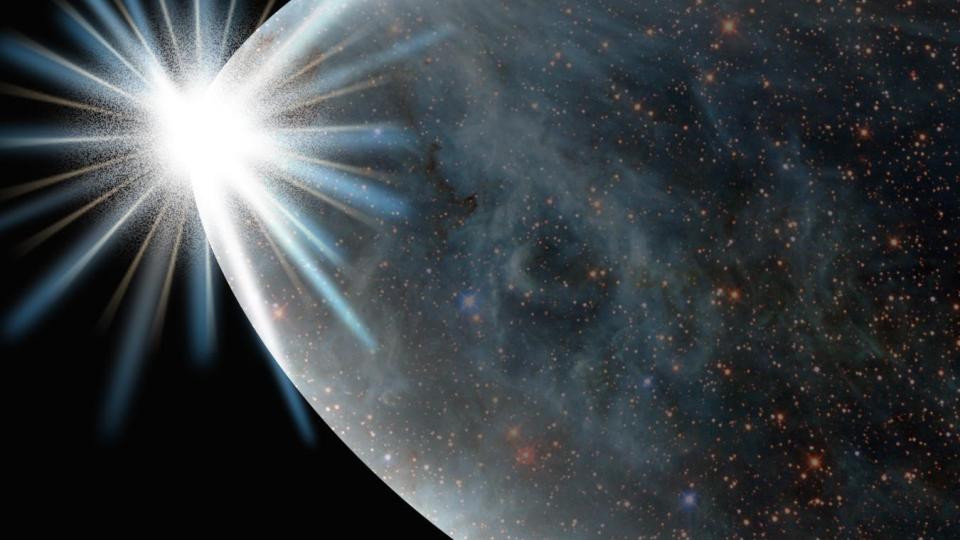 Our last story of the day is one that I’m doing last because it may make your head hurt. This is a story of theoretical cosmology, and it looks at the first moments after the formation of our universe.

Before I get into the science, I want to start with a disclaimer that neither the English Language not the casual language of scientists are consistent in their usage of some phrases. In general, when someone says “Big Bang” they are referring to the entire process that originated our Universe, from the moment that our universe came into existence, through to a few minutes later when we had a hot soup of hydrogen, helium, and trace amounts of Lithium and Berilium.

While that is how many, and I maybe even most scientists use the phrase Big Bang, there are those among us who use the word Big Bang only to refer to what happened after an initial epoch of inflation. For them, the universe is formed, the forces split, there is this crazy time of exponential expansion, and then and only then the Big Bang more slowly expands the universe. For the rest of this episode, we are using this narrower definition of Big Bang.

The reason for this separation is to make it easier to discuss the two different expansions of our universe. The epoch of inflation, while brief was also mighty, and is responsible for giving us the smooth universe we live in, where the Cosmic Microwave Background looks pretty much the same in all directions.

In a new paper appearing in the journal Physical Review Letters, a team led by Rachel Nguyen describe   a new model that allows the universe to undergo inflation, which would have cooled the universe, and then reheat it to trigger the big bang. To accomplish this, they needed to modify gravity to behave differently at very high energies, deviating from even relativistic effects. According to the MIT press release, “Quantum-mechanical effects predict that the strength of gravity can vary in space and time when interacting with ultra-high-energy matter – a phenomenon known as non minimal coupling.”

This added term was important because it allowed the universe, in their computer simulations, to transition rapidly from the inflationary stage, to a reheated Big Bang stage.

I’m not going to lie, this paper is more than I could absorb fully for this show. It would probably take me a week of reading related literature to feel I had a good understanding of it, and that is a week of reading I don’t have the time to do. What I can tell you is folks have made a universe in a box that in an internally consistent manner is able to  come into existence, have an epoch of inflation, reheat after the inflation, and then expand out in a way that facilitates Big Bang Nucleosynthesis. This model didn’t require anything extraordinary beyond the modifications to gravity at the highest energies. This ability for a model to transition gracefully between the different phases of the universe’s expansion is, as far as I know, novel. I don’t know when or if we will have the capacity to check this gravitational coupling in high-energy environments in a lab. While we can simulate some of the energies of the Big Bang, inflation has stayed out of reach, but if this theory become accepted, it could drive additional research that uncovers other possible tests.

I for one, am eager to see what research papers build on these simulations.

That rounds out our show for today.

Thank you all for listening. The Daily Space is produced by Susie Murph, and is a product of the Planetary Science Institute, a 501(c)3 non profit dedicated to exploring our Solar System and beyond. We are made possible through the generous contributions of people like you. If you would like to learn more, please check us out on patreon.com/cosmoquestx

Each live episode of the Daily Space is archived on YouTube. If you miss an episode here on Twitch.tv, you can find it later on youtube.com/c/cosmoquest. These episodes are edited and produced by Susie Murph.

We are here thanks to the generous contributions of people like you who allow us to pay our staff a living wage. Every bit, every sub, and every dollar committed on Patreon.com/cosmoquestx really helps. If you can’t give financially, we really do understand, and there are other ways you can help our programs. Right now, the best way you can help is to get the word out. Let you friends know, share our channel to your social media, or leave a recommendation. You never know what doors you are opening.