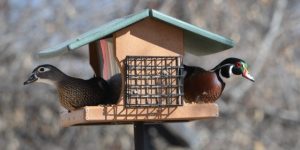 One of CosmoQuest’s main goals is to encourage citizen science, so one of the things we’ll do to encourage that is highlight projects from other disciplines and institutions. As part of this endeavor, I was directed to the PLOS Citizen Science blog, and this story about urban areas and their effects on bird diversity.

Botanist and birder Adeline Murthy, after observing birds around her city’s buildings and green spaces, wondered which species thrive in urban environments, and how does this affect the diversity of wintering birds across North America? She and two of her graduate students at the University of New Mexico decided to conduct extensive bird surveys across the nation to figure out these issues.

This project wouldn’t have been possible without the assistance of many amateur birders and observers engaging in citizen science, recording and reporting their observations as part of the annual Christmas Bird Count, an annual census of winter birds administered by the Audubon Society. The survey is conducted in over 2,000 locations throughout much of the US, Canada, and more countries each year. More than 55 million individual birds were counted in 2015 alone.

Survey data from the Christmas Bird Count (CBC) was combined with land cover data from NASA satellite imagery, and then species richness (the number of bird species at a location) and species turnover (how bird communities change across space) were compared to see what differed between urban and non-urban CBC sites.

The results were interesting – the number of species found in urban and non-urban sites did not differ. However, the kinds of species present in each mattered. Bird communities were more similar to each other from one urban area to the next than between more natural, non-urban survey sites. Urban habitats support similar kinds of species, encouraging the establishment of species that are well suited to life around humans, including many non-native species, while reducing the presence of certain native species adapted to more natural environments. And species found in urban areas tended to be more widespread – native and non-native – than species found in non-urban CBC survey sites.

How humans facilitate the distributions of non-native species is an interesting avenue for future research, which will be ongoing, thanks to the prevalence of citizen science data from avid birders.

Are you an avid birder, or know someone who is? Check out these bird themed citizen science projects on SciStarter!