Where were you when humans landed on the Moon on July 20, 1969? Buzz Aldrin wants you to share your story on the 45th Anniversary of the Apollo 11 landing on the Moon.

Aldrin encourages you to upload a video to YouTube describing where you were when he and Neil Armstrong landed on the Moon. My favorite part: “Kids, help your parents if they don’t know how to use their smartphones.” Use the hashtag #Apollo45!

I count myself as one of many who were not alive when astronauts trotted across the Moon. But I, and those like me, can tell the story of how the Apollo missions inspired us.

I grew up in a world where the Moon had been visited by people. Astronauts had always existed in my world, and I always wanted to be one. Although my path hasn’t yet taken me to space, the fascination with space travel led me to science, and science ultimately to astronomy. For my 16th birthday, my aunt and uncle gave me a gift I would never forget – a trip to Kennedy Space Center. A native New Yorker, I had never even been on a plane before, so this was my furthest trip yet. There, I got to see up close and personal for the first time, the Saturn V rocket.

After the Apollo program was over and Skylab launched, three Saturn V rockets were left unused and put on display at various sites around the United States. One is featured in a large hangar at Kennedy Space Center, and it presents a truly jaw dropping sight. Before you go into that, however, there is a little video presentation taking you through the drama of the Apollo 11 mission and its harrowing landing and historic first footsteps. I had seen the video clips before. I had heard the audio. But this time, in a darkened room, surrounded all day by space past, present, and future, I cried. I can’t even tell you what the motion was. Pride? Joy? Wonder? Whatever it was, I felt it and I had tears. I imagine that had I been alive in 1969 watching that television broadcast, I would have done just that.

I hope you’ll feel free to share your Apollo 11 stories here and using the hashtag #Apollo45 on various social media sites. And if you’re feeling creative, go ahead and upload your video to YouTube in reply to Apollo45 and let Buzz know what Apollo 11 means to you.

And now for the obligatory “I found Apollo 15 in Moon Mappers” screenshot! 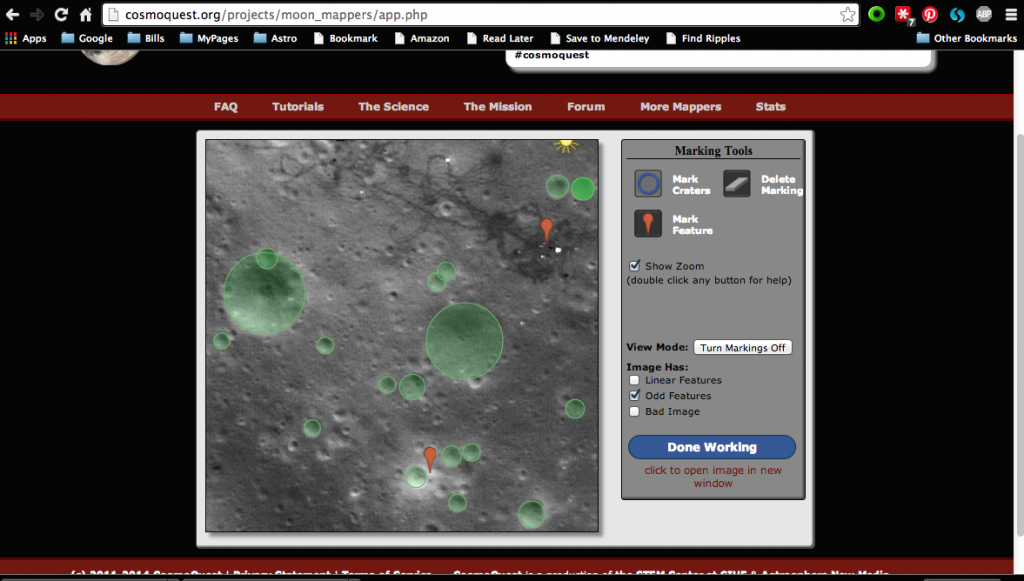